The Maestro! Bell makes it's debut at the BBC Proms 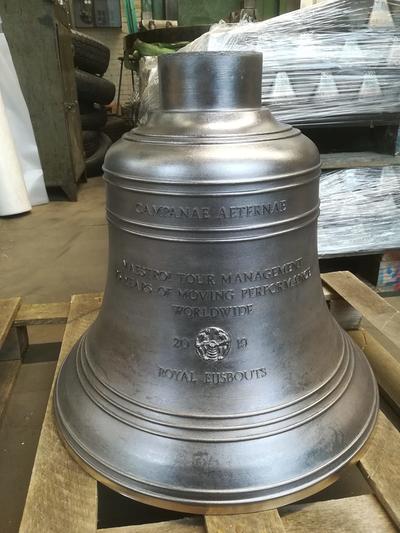 Royal Liverpool Philharmonic now have the largest collection of church bells of any orchestra in the UK. The project which was started 25 years ago by Graham Johns has now reached its climax with the addition of the final three bells - the Vasily 'C' Bell; The 'G' Bell and the Maestro! 'B' Bell.

The bells were made in the Royal Eijsbouts Bell Foundry in Holland. They feature, in beautiful bronze relief, the Liver Birds and the official flower of Liverpool, Sea Holly.

Apart from now having this perfect set of bells, the orchestra has the opportunity to hire them out to other orchestras in the UK and Europe. The Maestro! Bell actually started earning its keep before coming to Liverpool when it made its debut with the BBC Philharmonic Orchestra under Maestro John Storgårds for their Prom concert of Shostakovich 11th Symphony at the Royal Albert Hall on 5th August.

On Thursday 19 September, the Royal Liverpool Philharmonic will be the first orchestra in the UK to perform Berlioz’s famous Symphonie Fantastique with the correct low bells, as originally specified by the composer.