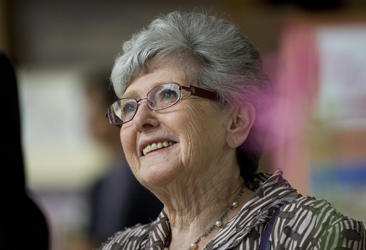 90 years ago today a star was born! Not Notorious RBG but the Incredible MGB!

In 1938 Milena and sister Eva were put on a train in Prague to escape the terror's of Naziism and a new life in England. They were lucky in that they were later reunited with their parents who had managed to escape. Their story (and that of Sir Nicholas Winton who organised the 'kindertransport') only became known to the world in 1988 when Esther Rantzen invited him onto That's Life! and reunited him with many of the people that he had saved.

Milena has been a friend to Maestro! since before the company was born and over the years has taken many groups of music lovers to the Czech Republic, Poland and Austria. She has dedicated her time in the past years to talking to groups of school children about her experience as a refugee and how this country welcomed her. So far this year she has given more than 40 talks to groups as big as 800 in the Floral Pavilion on the Wirral.

Just last week 150 guests gathered in the Liverpool Phil Music Room to give her a surprise pre-concert reception.

Milena's chosen charity is 'Safe Crossing' and if you would like to show your support you can leave a gift via her birthday giving page using the link below.